Selene: The Most Famous Bull-Leaper on Earth 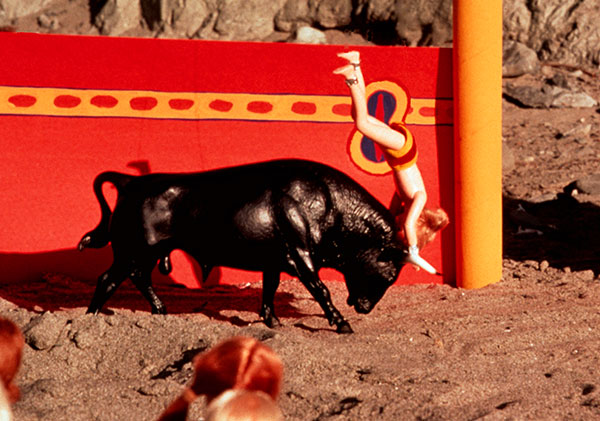 Marcella, my daughter, and I often “played dolls” together. Sometimes we’d act out stories we’d read: Little Women, The Secret Garden (turning the boys in the story into girl Skipper dolls, Colin becoming Clara and Dickon being a girl).

In 1977, when Marcella was eight years old, Z. Budapest published a children’s book, SELENE, The Most Famous Bull-Leaper on Earth. We read it, loved it, thought how fun it would be to act it out with our Skipper and Barbie dolls. We made little bull-leaping kilts for the Skippers, improvised the rest of the costumes from what was at hand, and made a bull ring from cardboard and poster paint. We loved seeing Skipper dolls leaping bulls in ancient Crete. We decided to photograph what we’d done, went overnight to the Oregon Coast, and took the first pictures. We made a little slideshow to show our friends, and things grew from there.

We worked on other scenes when Marcella was 19, 21, 22, and 28. My niece, Kimberley Fitch, and later my then-assistant Mariah Hegarty became part of this project. We’ve done things with more and more sophistication. Some of these scenes are highly developed; for others, you use your imagination like you do when you play dolls: remember, for example, all the things a chair can be.… So, it’s a mix of styles; we can look at it as “post-modern.”

One more thing, a note about the actress who plays Selene, Judy Ann [Mattel’s Swing-A-Rounder Skipper®]: Early in her life, she found herself in an Irish Wolfhound puppy’s teeth; Marcella saved her. She was left with scarred arms, but perhaps it was that near–death experience that gave her such a beautiful soul and made her the perfect one to play Selene.