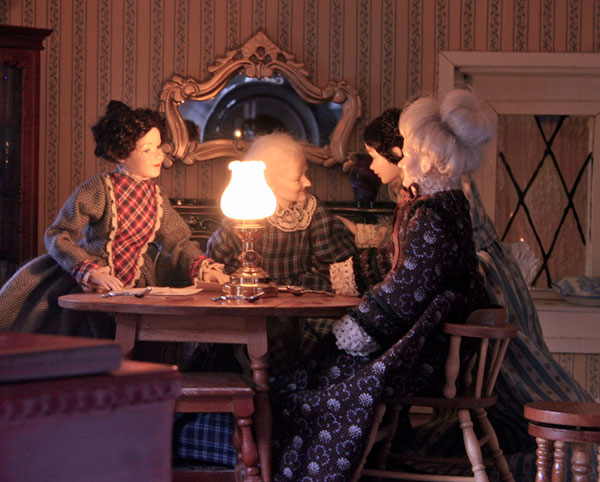 Some new and interesting tenants move into the old dollhouse.

The old woman with the black dress, Cristabel, is Polly’s favorite aunt. Polly and her dear heart Eleanor are not actually moving in — there is only one bedroom. They are roommates in a boarding house and earn their livings in town. But it feels as if they are moving in, too, because they expect to be here a lot.

Fact is, the house is to become a hub for the growing “Votes for Women” movement, which began nearly two decades prior in 1848.

The older ladies, Annie and Cristabel? They have what at this time is called a “Boston marriage” — as the world sees them, two old maids living together, keeping each other company, sharing expenses. And if they share the same bed, what of it? Nights are cold and bedrooms not so plentiful. Beyond that most folks do not think.

As the series proceeds, the idea of a Boston marriage continues to expand.

“Where space shrinks and time expands.” In about 1870, suffragists Annie and Cristabel move into the old dollhouse. Soon their young friends Polly and Eleanor hatch a plan to build an addition onto the fourth wall.

In this series, Boston Marriage 2, the four women gradually move into the new rooms as they are built, continue their work for Votes for Women, and enjoy their lives and loves.

Four women live together in this 1868 home. Friends, suffragists, and lovers, Cristabel and Annie along with their young friends Polly and Eleanor make a life. There are two earlier segments of Boston Marriage.