My most recent project is a historical novel about Kristina of Sweden, who lived in the 1600’s. She became king of Sweden at the age of six. Yes, the king. That’s what you’re called in Sweden, if you’re the ruler…  She resigned at the age of 28, during her first Saturn return. She was an intellectual, a peacemaker, and a lesbian.

In this piece, Kristina is three years old. Her father is getting ready to leave for a war in Europe (The Thirty Years’ War) … Also, later in her life she is going to fall in love with a young woman her own age, named Ebba.

My father entertained as well as he prepared for war, and with as much enthusiasm. His last fete in Sweden was the funeral feast he gave when Abraham Brahe died. The king and his old counselor had quarreled more than once, but the ties between the two families were deep. And when Count Brahe died in March, my father returned to Rydboholm Castle, the ancient Vasa family seat, to host the funeral feast.

Sometimes people become merry after a funeral, as if the tears and the solemnity had released them to a new appreciation of life. And so it was that day as we stood in the courtyard greeting our guests. Through the arched gatehouse with its pointed copper roof the carriages arrived with a clatter and the barking of dogs. Guests alighted with hallos and courtesies. In the first warm afternoon of spring, we lingered in the square of sunshine, exchanging greetings, condolences, news; and always before we moved inside, another carriage came. Servants circulated with silver trays, bearing the welcome cups of wine.

The occasion had begun formally, but by now I walked with my father as he moved among the guests. At the moment, Elsa Brahe, half his size, and twice his age, was taking him to task.

“Gustav, what’s that you’re drinking, water? What a way to honor my Abraham!”

“Peace, Godmother,” smiled my father. “I’ve already pledged him with a cup of wine. And it is not my custom to drink wine before dinnertime.”

“But, dear boy, water! It can make you good and sick! And where would Sweden be then?”

“Illness can’t keep me down,” my father laughed. “Anyway, Godmother, I’ve drunk water all my life. Lots of it, as you well know.”

“But you’re not giving it to the child!” she exclaimed in contradiction to her eyes, as I reached for his glass.

“Yes, I’m afraid she’s even more extreme than I am.” He picked me up. “She won’t touch wine or beer.”

“A child can’t grow properly without beer, Gustav! How thin she does seem!”

My father had begun to look for a means of escape, and found it when the dogs announced the approach of yet another conveyance. From a group of men standing near the gate, Per Brahe peered out along the road.

At those words, I felt a shock go through my father’s body. Or was it so physical a sensation? Or, riding his hip, did I simply know his feeling? The pang that swept through him, of loss, and longing, and love. A three­year-old has names for none of this. A three-year-old is given a word,  “Ebba.”

Children burst from the carriage as it stopped, and then a rosy­cheeked lady with large, dark eyes. Those eyes sought first her husband’s, General Jakob de la Guardie; then she turned and came to make her obeisances to the king. To the royal family, for my mother was by now at his side.

All trace of that tremor had passed, as the king greeted his dutiful subject and family friend. Passed as if it never had been. And, curious about the new children, I forgot it, too. Except that somewhere in the recesses of my being, a bell had been set ringing, like the church bell that had tolled in the clear morning air, its sound spreading in circles, falling like sunlight and sadness and solemnity. “Ebba,” “Ebba,” “Ebba.” 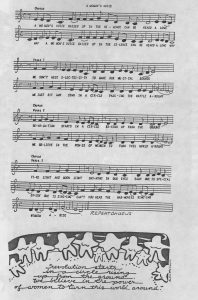 I’d also like to read a little piece from my journal, from a time when I was writing on Kristina… Also, at the time I was taking a course on modern physics.

Lately, I’ve had the most lovely time on my walk on the trail in the woods.  It’s fun to obsess about someone besides myself, fun seeking Kristina’s voice, or mine, as my feet adjust to the steep terrain and my body dodges bushes on the narrow trail, climbing and thinking about things… And watching the branched architecture of the manzanita, sometimes in arched, Gothic perspectives ahead of me, hung with moss like banners from a cathederal. …Or sometimes its shining, twisted, branching limbs are altogether more baroque.

As I enter the path through the bushes, I sometimes sat to Kristina, “OK. Get out her calculating machine!” She opens out the case of gold-tooled black leather and lifts it out. In my mind it is an ornate metal box, and comes apart with little screws. Everything is intricately ornamented as things were in those days when scientific instruments were made to be beautiful as well.  And this one is cast for a Queen. Inside are little interconnecting rods and gears, that stand in mathematical relationships to each other, the laws of arithmetic expressed in yet another language, written in matter, in intricate wheels and gears and rods of copper, ivory, of brass, anchored so carefully that nothing comes loose on the perilous journeys these devices must make from Pascal to his far-fling patrons.

“All right!” I smile to Christina, “Let’s go!” She cranks the lever, the copper and ivory begin to turn and sparkle in the candlelight in the castle night.  I dive into the bushes onto the secret trail.

I climb and watch the branches pass and listen for our voices.  Bits of conversations, of thoughts, hers, of mine.  Thinking about how things might have been, are, could be… Watching the light.  …Ahh.